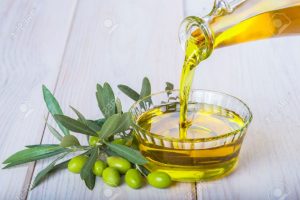 We normally pick our Olives in early November. It proves very popular with guests. Some like to join in for an hour or two, others like last year spent three whole days helping out and very grateful we were to. Whether guests help for 10 minutes or three days they all enjoy the trip to the press to see for themselves the process of producing Extra Virgin Olive Oil from fruit they have helped to pick. We have 55 trees and hope to get around a tonne of Olives but it varies from year to year. The yield also varies depending mainly on the water content, a lot of rain before harvest will result in around 1 litre of oil from 25KGs to 1 litre from around 20Kgs of Olives.

We pick the fruit over a three day period, it is important not to leave the Olives any longer than 72 hours before pressing as this increases the acidity of the oil. The fruit is gathered by combing the branches with small plastic rakes so they fall onto large nets spread under the trees, these are then emptied into our trailer for transport to the press. 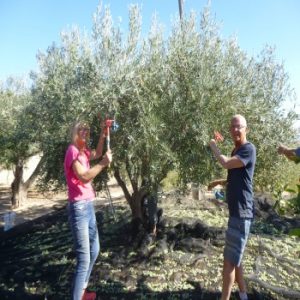 At the press the Olives are cleaned and separated from any leaves and twigs and then the Olives are “Cold pressed” at around 35º to release the oil from the water. Depending on which press we use either we bottle it ourselves or they do it for us.

It’s not all hard work though. We try to enjoy a nice lunch each day during the picking and when we go to the press we have a nice coffee and tostado while the pressing is taking place followed by a long lunch on the way home.

We still have some availability during the beginning of November if you would like to help while enjoying a break at Finca Arboleda.

Spain is the largest olive oil producer in the world, accounting for 44 per cent of the world’s annual supply, and the country’s love affair with the diminutive fruit shows no sign of decline despite new challenges.

WITH an estimated 340 million olive trees, Spain produces around 1.2 million tonnes of olive oil per year, enough to fill 400 Olympic swimming pools. About 45 per cent of the country’s olive oil is produced in the Andalucian province of Jaen, where olive plantations occupy 590,000 hectares including 66 million trees. These account for a fifth of the global olive oil supply, with the region producing more than the entire country of Italy, the world’s second-largest manufacturer. Olive trees are said to have been introduced to Spain by the Phoenicians almost 3,000 years ago, but it was the Romans who started large-scale production, with the Moors later introducing improved growing methods.

I found this fun video on YouTube and have promised myself that I will make one this year.

Just a few words from a happy couple who left the Orange Grove yesterday.

The house is great, a very quiet environment and a pool with very good water , so much so that it makes you want to spend the day there. The house also very complete and as described. I will definitely return. 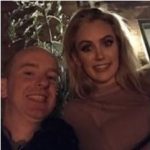 A secluded private piece of paradise. If you want peace and quiet and to be surrounded by nature this is the place to come. The hosts are warm, friendly and very accommodating. The accommodation was clean and tidy and very practical. Thank you for allowing us to stay at your wonderful Finca and we hope to see you again soon !

Posted by lee on https://www.airbnb.com/users/reviews

We had a great break away and will definitely be returning to the area and to the Finca Arboleda if they have availability when the time comes. If I was lucky enough to own such a slice of paradise, I’m not sure I could share it with others!! Regards Rodney & Carolyne, Cavan, Ireland. 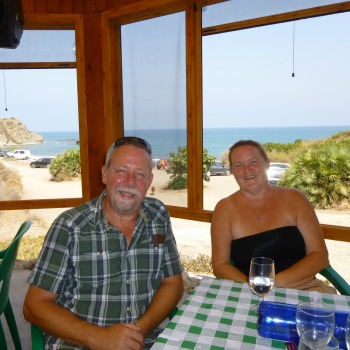